True to form, it's taken ages yet again.

Picked up the ute on Friday to go chase the snow that was headed for the Blue Mountains this weekend. It's going back Monday morning to have the new wheel carriers, ladder and rocksliders (with new welded on brush bars) put back on when they're back from powder coating. Booster is in, but somethings not right......we'll sort it then too.

I've gotten used to this by now

Taresk, no idea why it's only diesel? Maybe call Marks? 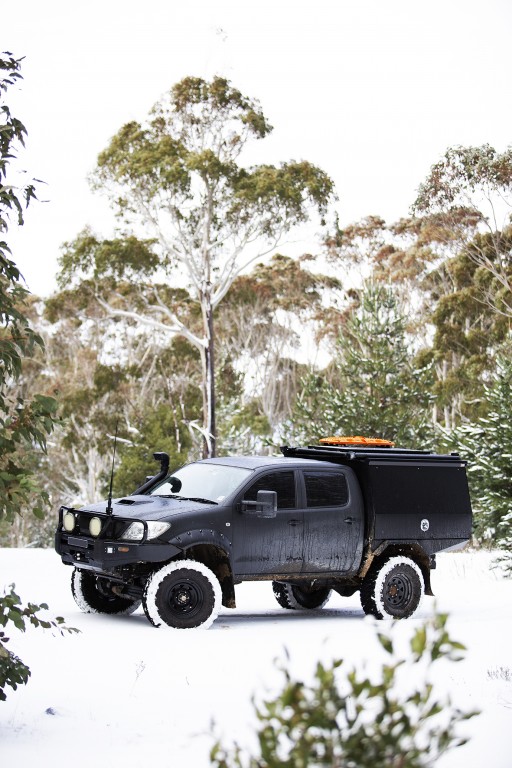 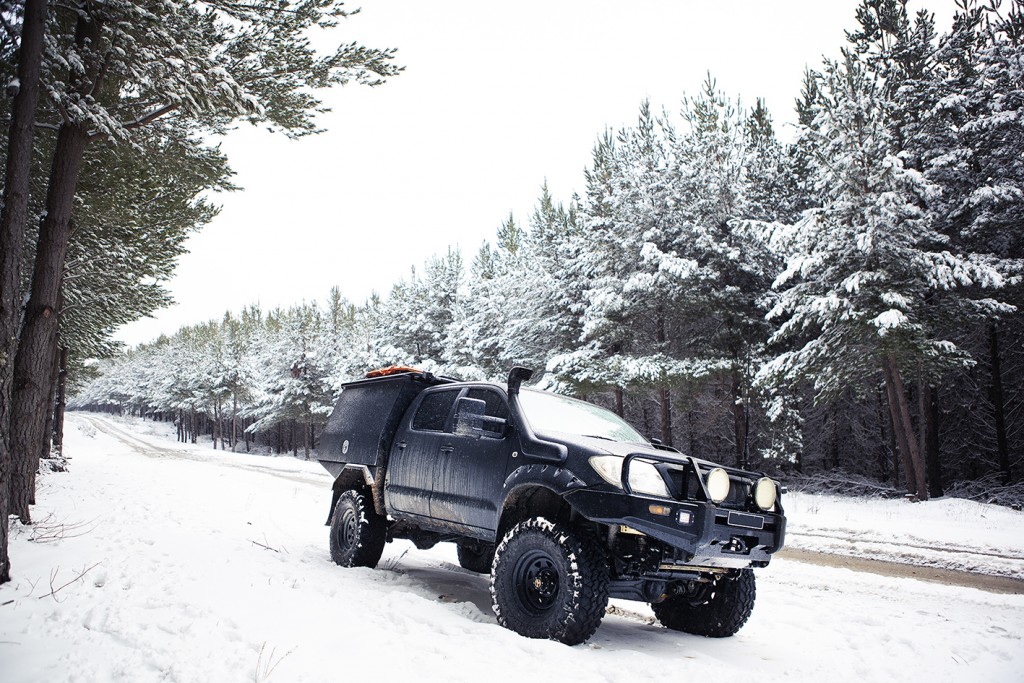 Mate, this truck is looking like a beast. Awesome pics in the snow.

Just a quick question: i know you've had a few setbacks with the SAS, with Jocko getting his Lux done through Kinsela's for 4WD Action and what not, but wondering if overall you are happy with the main outcome/service/craftsmanship, etc? Would you recommend a SAS from them?

Thanks on advance. Been a hell of a build thread.

Yeah I would recommend him.
I managed to catch him as he was blowing up (and he actually moved his shop during the build too) so I'm putting some of it down to bad luck.

Kinselas have actually modified a few things on the canopy as well for me. Originally when it came back the guards were never going to fit 35's (just like the rear wheel carriers

) and the panel holding the rear lights didn't give the best departure angle. I had asked Spinifex about angled up wings for the lights, but like most of the canopy and tray builders, they have a design they use and modifying that is expensive. Matt's a custom fabricator, so nothing is off limits. I loved the canopy when I got it back, when I saw what Kinsela did for me (at less that 25% of the price it was going to cost) I was blown away.

He puts a lot of thought and effort into his builds.
Yeah, they could have been a bit more organised from the start, but I did miss my window getting there because of courier dramas. The quality of the work is great, and they take pride in it.

), but I don't regret it. I smile like an idiot every time I look at it or climb up to drive it (I'm 6'3" by the way). And as long as it took, the ute has gone through a MASSIVE change for less than you'd pay for a Prado.


I keep promising decent shots of the canopy, but not until it's finished. Doesn't seem right

But, what happened to it was

-Raptor Liner respray (included dent removal)
-Custom front seats from Proseat Auto
-replaced tub with custom canopy (I'll go into the details of that once the spares are back on, but I'm running a third battery in there with the fridge and it's own DCDC to handle charging and solar)
-SAS with 80 series diffs front and rear. Kinselas do a hybrid rear housing that works out to be the same price as re gearing the original diff but you end up with a much stronger unit
-my rear e locker was moved to the new front diff as hilux rear is the same as 80 series front
-Superior Engineering superflex radius arms
-custom sway bar and upgraded tie rod and drag link
-diff bracing
-slotted rotors and braided brake lines
-hydro booster (still sorting that out)
-Fox shocks and Dobinson springs (after everything else I'd done I couldn't justify coilovers)
-ARB bullbar was modified to be wider and meet the Kut Snake flares (looks factory) and have led fogs mounted
-Runva winch
-ARB long range poly tank
-all approved and certified by an engineer!
-still have to do some rewiring with my mate in the engine bay and hook up a switch or 2
-brush bars go on this week
-then there'll be a few bits and pieces to stuff around with that nobody will ever notice, like respray the grille and do something about blacking out the chrome handles on the canopy....and then I'll see if Santa (me) will get me a front mount

That's awesome to hear. I've seen a few Hilux's with SAS work through him, but never had the opportunity to talk to the owners. I'm glad to hear positive feedback.

Cobba7490 wrote:Also, if you're 6'3" and "climbing" into the drivers seat, my short arse might have to re-think about my plans, haha.

Mate, if you're thinking about it, my only advice is go for it!

Really does look good in the snow.

I shot Mark's Adapters an email about the booster, apparently it's just because they've never had a V6 to test, so can't guarantee fitment.
My build thread

I shot Mark's Adapters an email about the booster, apparently it's just because they've never had a V6 to test, so can't guarantee fitment.

Can you volunteer and get a discount?

Haha, not a bad idea


Got the ute back went snowboarding and then I've been too busy driving it around grinning like an idiot to post anything. But here's what it looks like now 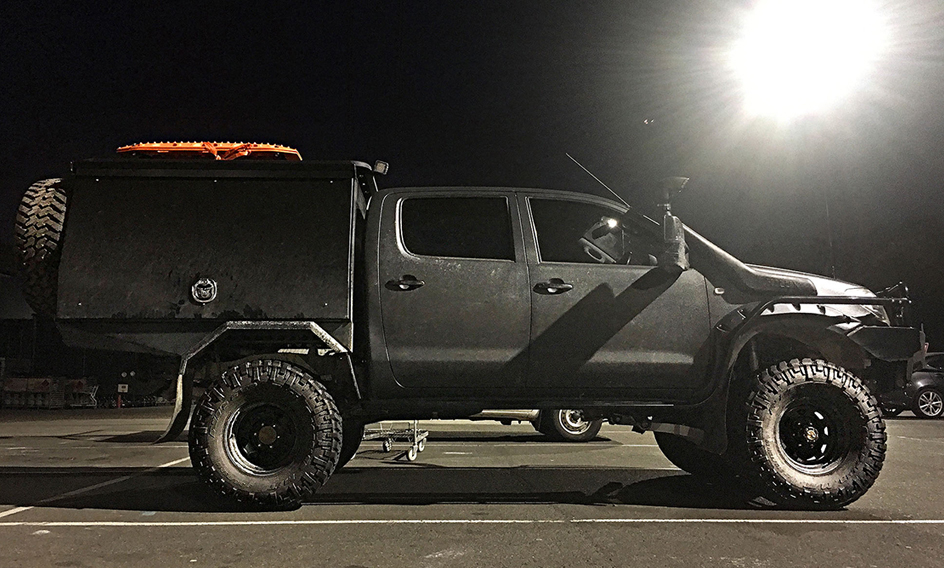 Shot of the rear with the new wheel carriers, and ladder spaced to fit. 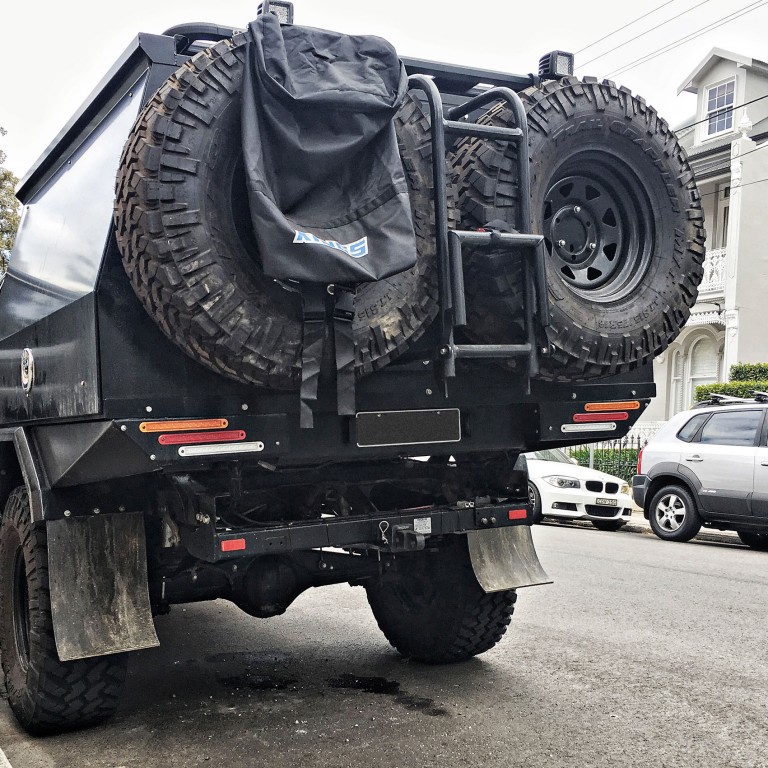 And the canopy.
130L upright fridge (with a freezer section) with a 100ah lead crystal batt mounted behind it. I LOVE the upright fridge, and because I don't need a fridge slide and the upright has a much smaller footprint, there's plenty of space back there. This battery has it's own dcdc charger (there's a 50ah aux under the bonnet to run accessories and I can link to the stater to jump if I need....although we still need to wire the switches up

) and solar input wired to the roof. I've mounted a 160w panel for now that is more than outrunning the fridge in this weather....see what happens in summer. Spinifex reckon their canopies are well insulated and vent heat too, so I guess we'll see.

Got tie down rails on both sides. 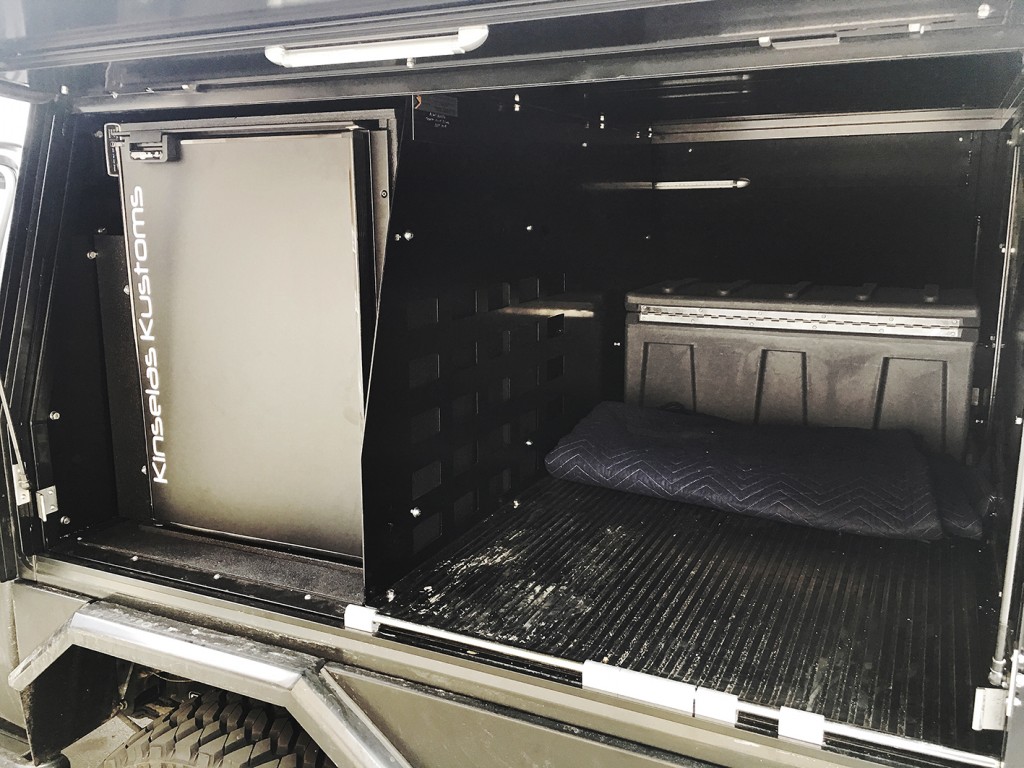 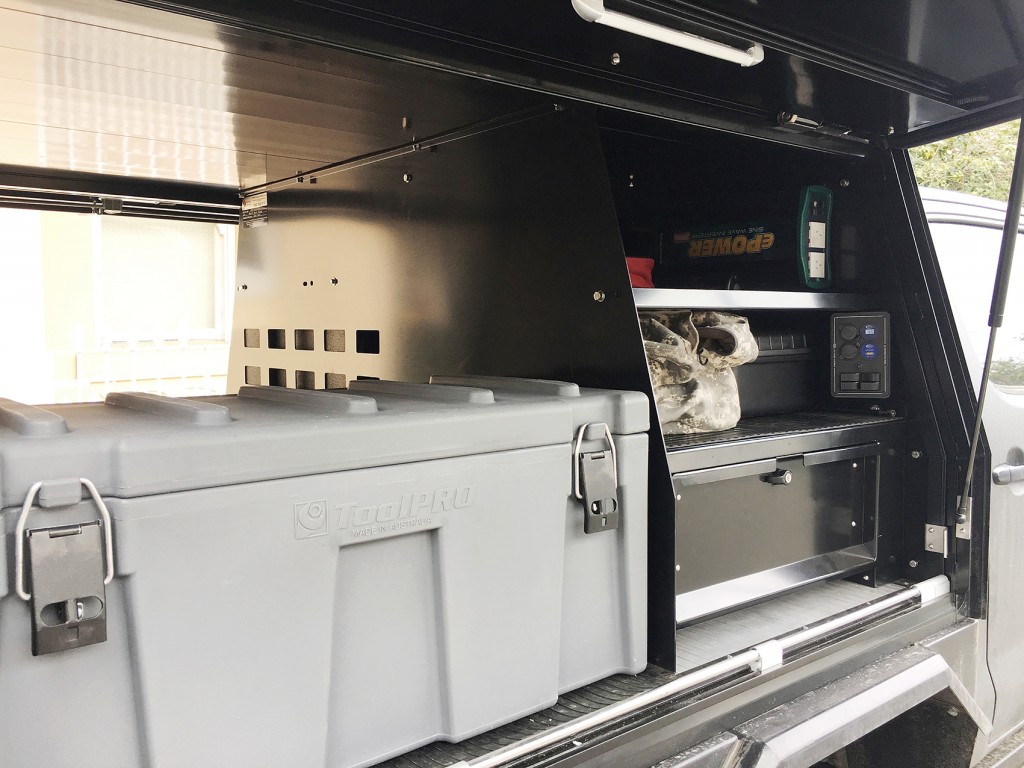 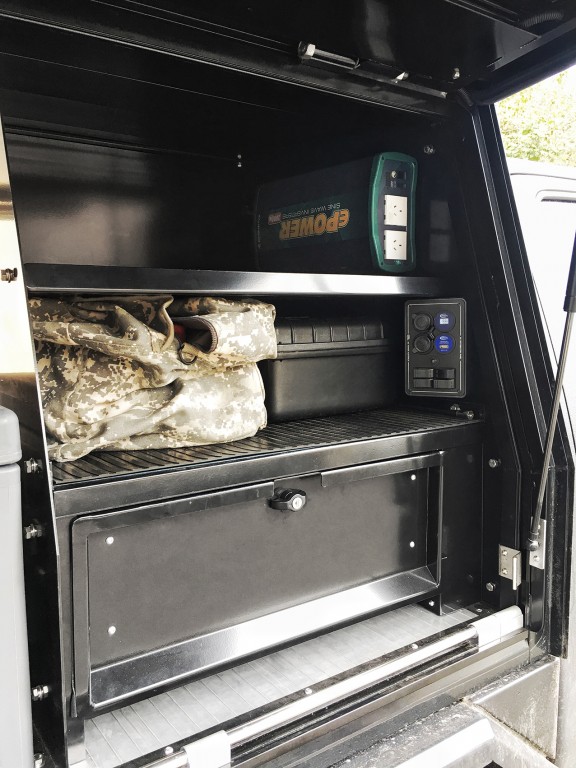 Drivers side is a drawer, with 2 shelves above it. Baintech dc power distribution panel with 2 cigs, usb, master switch for canopy interior lights and battery monitor and a 2000w inverter on the top shelf for charging cameras and laptops.....or the wives hair straightener apparently.

Booster is all good too. The pedal feel is different, and has taken some getting used to, but it pulls up better on 35's than it ever did on 30's

That is a great looking hilux

Sick rig mate, id be happy with that...

Been a long haul, hopefully have the last bits of wiring sorted next week.....and of course I've been day dreaming about what I want to do next. When the bank account recovers

Update on the hydro booster from Marks4wd. Once you get used to the fact that the pedal feel is a completely different animal than the vacuum booster, the brakes are mental in comparison to stock.
With braided lines, slotted 80 series rotors and callipers, it'll lock up the 35's if you jump on it. With ABS it would be even better!

Blacked out the chrome canopy handles this weekend....they were annoying me so much.

When I ordered the canopy originally, the black handles were on backorder and I didn't want to wait (if only I knew....). The mob that built the canopy use the whale tails cause the door locks at 3 points (which is rock solid), and the black version still has a chrome surround, only the 'T' handle section is actually black. Was going to get them powder coated with all the other stuff that got done, but the powder coaters reckoned they couldn't do it.

So I sanded, etch primed and painted the handle and then just plasti dipped the surround once that cured. Figured the handle would need the paint as it's a high wear part, and plasti dipping was a LOT easier than sanding the whole thing back on the canopy 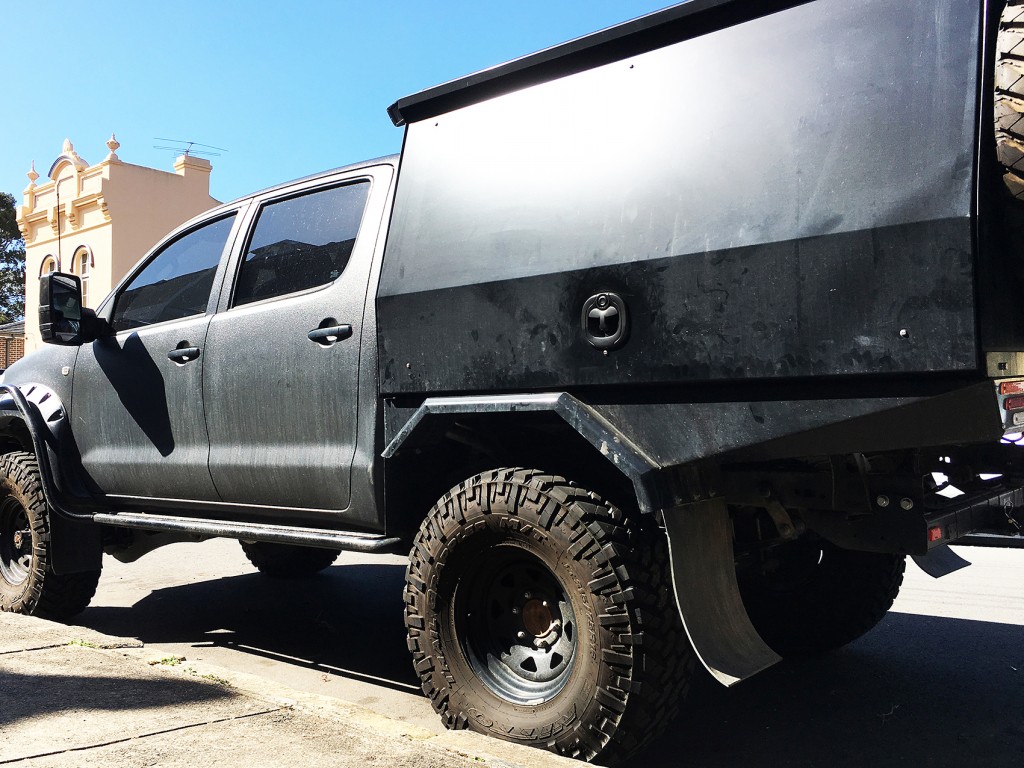 Nicely done man!
1 month off reading the forum and coming back to this was a treat!

BTW, did you paint the door handles on the cab also? or where they powder coated?
- Arne from Norway here, glad to chat with you -

Honestly, I bought it used at a price too good to go past. My mechanics son had to sell it 'cause he couldn't drive a manual after an injury.

Looking back I got lucky. I never liked chrome, the SR interior is easier to keep clean and I'm not 100% sure but don't think you can legally SAS a model with VSC. So if I had the SR5 of the same year I would have had to have gone a different path.

Went to mates workshop with plans of sorting out the wiring under the bonnet.
We bought a relay hub that houses 6 (I think) relays and fusses in one unit and only requires one power source so we can get the wiring nice and neat, it's a bit of a mess right now.....unfortunately the space we were going to use is right where the hose will go if I put in a front mount. So plan b involves moving the aux fuel filter to the firewall next to the hyrdobooster (which is not as wide as the OEM, but sticks out further into the engine bay) removing the hpd catch can (apparently they only do about 60% of the job they should according to this http://mag.unsealed4x4.com.au/u4x4/issue057/#125) and installing the flash lube catch can where the fuel filter currently is and making a bracket for the relay hub and mounting it between the catch can and the air box.....at least we have a plan for next time

We did sort out the switch for the fridge though. When they built it they used 5 pin relays and had one wire on the wrong pin so the 'on' position on the switch turned it off. Took longer to remove the fridge and it's surround than to sort the actual problem.