Thought Id post up some pics of my new toy. Having driven a bone stock AE100 for the last two years (sensible new dad) and owned/built lots of 'fun' cars/trucks before that, its nice to have something interesting to drive again. In breaking that cycle I decided this time around I'd buy something already built and avoid the money pit of building something from a blank canvas...

Ute is a 2WD KUN Hilux with lots of fancy bits. Pic when I bought it:

Most braggable is one of these:

Could play name the engine game but its pretty unidentifiable given aftermarket everything, previous owner built it to look like an old school V8 but the keen eyed will notice the fuel rails and injectors

Motor is a '97 LT1 with big cam, Dart heads, headers and lots of other bolt ons. Sits in front of a 4L60E and also has R33 front brakes, XR8 disc rear end (shame) with LSD, and twin 3" mandrel exhaust (sounds tits!)

Is also run by one of these (full 8 cylinder multi point):

So far haven't done too much, was fumey in the cab with crank case breathers venting to the engine bay so added a catch can, also changed some engine bay wiring I didn't like. Front bar was junk so ditched that and de-chromed wing mirrors, badges etc. Also added a rear hard lid and TRD grill. Wheels is next big ticket item though not sure which way I'll go there...

That is so cool. I'll bet in can chirp the tyres lol[emoji23]

Indeed it can, the rear mudguards have twice as much rubber as stock

Dont wanna go crazy low profile on the tyres as still want it to ride well and be able to drive up/down curbs etc and generally use as a ute. Rear is 2" lower and about 3" lower in front with compressed springs so figure its gonna have to come up a bit regardless of what tyres I use, happy enough about that though as again want functional/daily driveable. Figure coilovers are the only way Im gonna be able to fine tune it the way I want, has anyone on here built their own front coilovers or aware of any off the shelf?

Finally got around to getting these on, or buying tyres at least. Rears are pretty much where I want them but front gonna need addressing (pic is with the front jacked up to match the height of the rear) Does anyone have a standard height kun16 they could measure the hub centre to top of guard for me (preferably without farked springs)? Previously assumed I'd need coilovers but if could get away with standard springs I'd consider it...

﻿﻿﻿Hey fellas
Been quite a while since I posted in here and ute has been busy getting reinvented.

In a nutshell the old engine setup was a pig, and the longer I owned the truck the more I found stuff about the conversion that annoyed me. As per the original post this was the first vehicle I bought already built, under the illusion that that would save me money. However I'm a fussy bastard and there were so many corners cut in the conversion that I decided to keep the good bits and remake the bad (which has ended up being most of the mechanical bits).

First thing to go was the LT1, it had way too big of a cam for what I wanted the truck for (ie punting around the streets) so keeping the american muscle theme I imported an '08 Silverado﻿ ﻿﻿donk﻿, aka 4.8 LS motor. 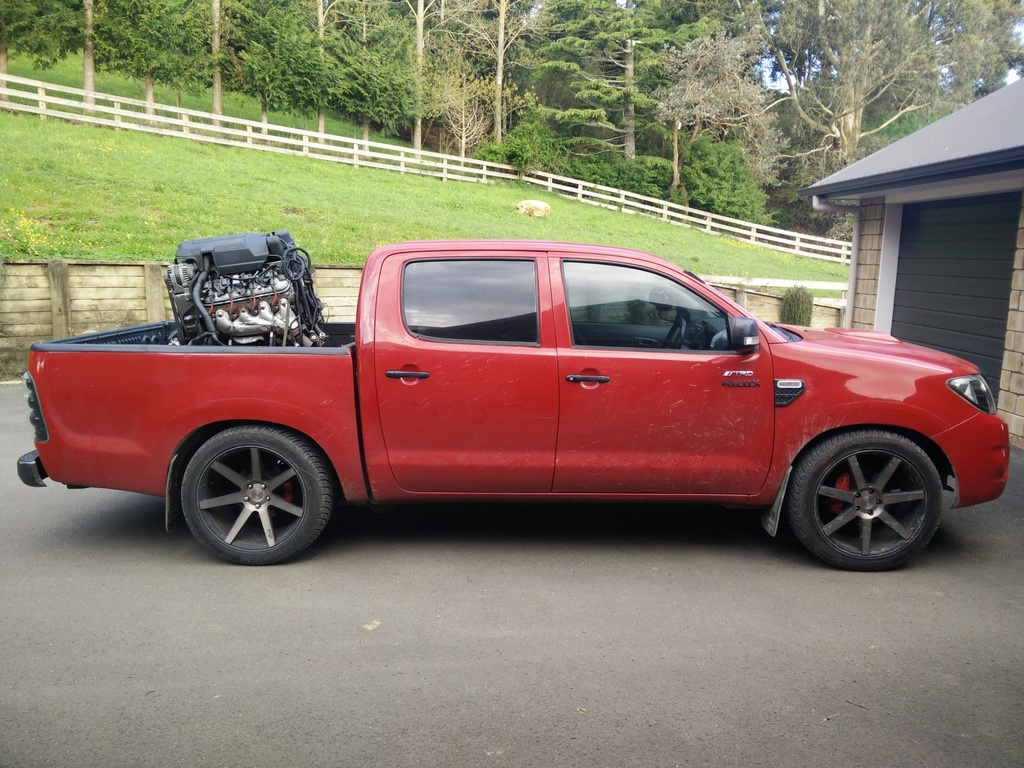 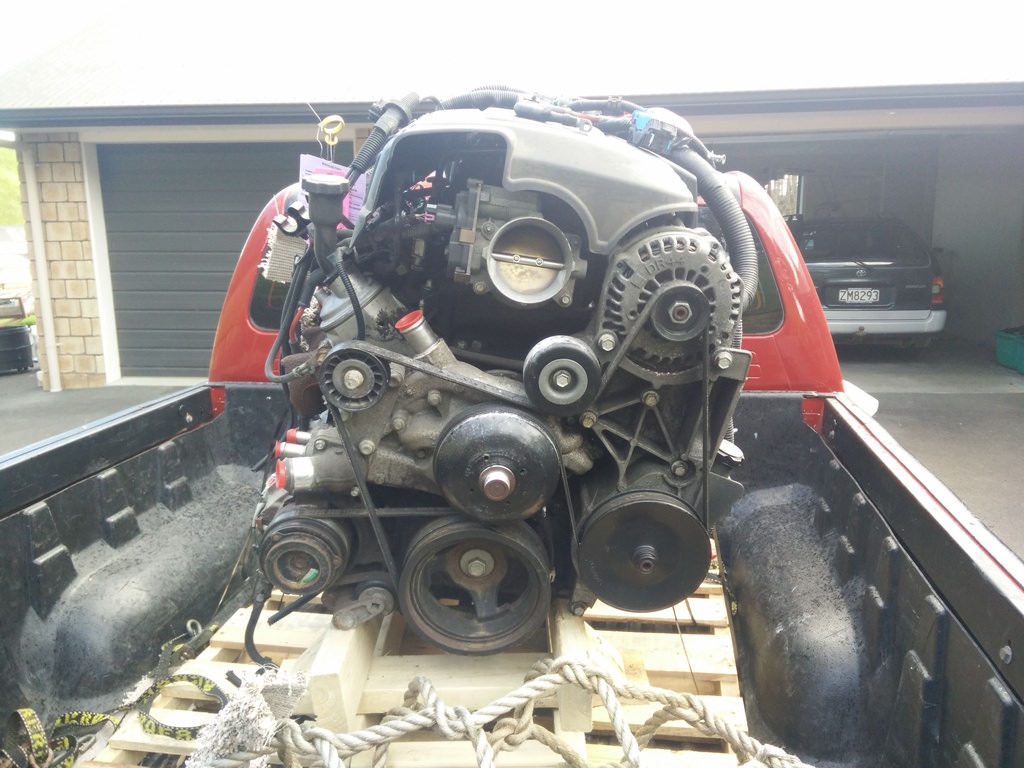 It is the smallest of the LS series engines, couldve bought something bigger but plan is to turbo it and hopefully get the best of both worlds being fuel economy underneath boost, and insane crazy power when so desired. Also bought some bits to upgrade the baby LS 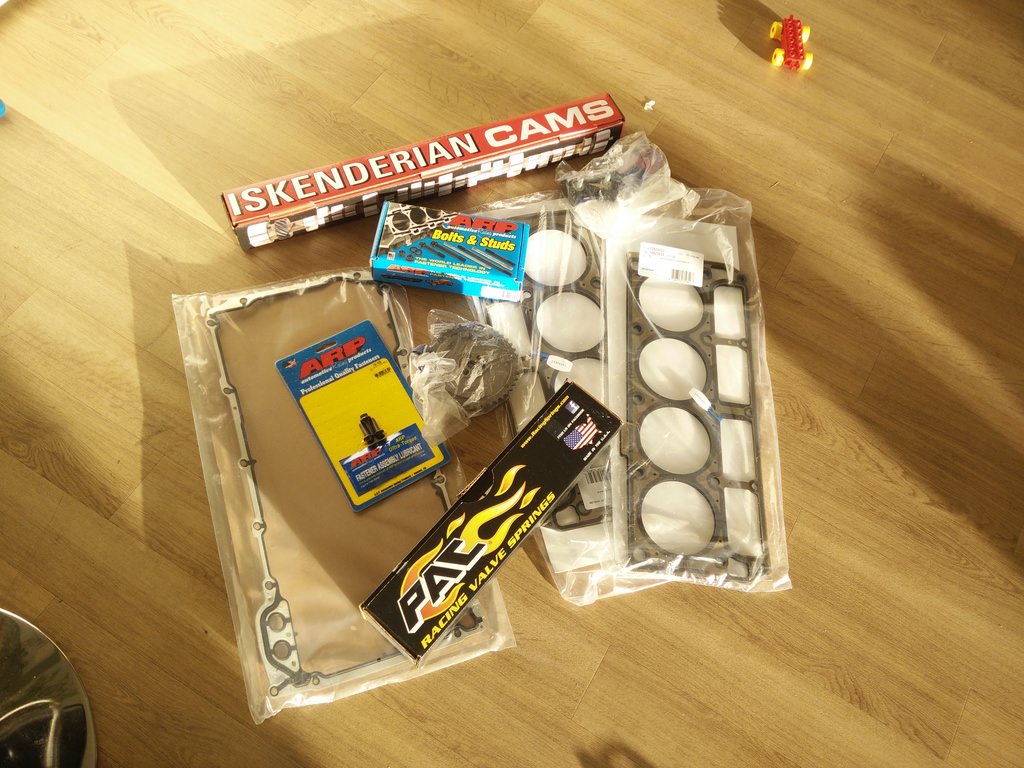 I would have kept the LT1, and then put a smaller cam in it. The LT1 alloy heads (assuming it is one of those LT1's) are really good heads and if the right cam is used work really well. I am building a 385ci SBC right now for one of my HK GTS's that has LT1 heads, it should put out about 450hp but be very tame down low due to the profile of the roller cam chosen. It will be running Holley Sniper EFI and timing. Will have A/C and power steer and will have good vacuum for the brakes.

Will be a wicked Hilux with a turbo 4.8L LS though. I'd use a belt driven "turbo" though, like a Vortex or the like. I'd love to fit an LS and 6L80E into my 2011, but it is a lot of work on an older truck. Will probably buy a Ram1500 or a Nissan Titan when they come into Australia RHD (hopefully) next year. I saw a video on YouTube last week where they fitted a 7psi supercharger to a stock Ram1500, it was doing 12.5s quarters at 106mph yet still idled like a kitten and pulled like a 7.0L diesel.

Monaro sounds cool, any pics? I contemplated stroking the LT1, but also wanted fuel economy for sedate daily driving and the LS is a much better platform there, plus the aftermarket is way bigger and once you start modding them they are capable of a LOT more power on factory internals (ie less $).

Also didn't want a supercharger, a starlet I built years ago demonstrated that you can have big power and economy together if you size the turbo right, can cruise underneath boost for miserly highway driving and then build boost quick when you step on it by not going too big turbo wise. Plus ultimately make way more power with proper turbos, this lump is getting 2x

I don't think I can add pictures here, will try later. It is a dead stock looking HK GTS in Warwick Yellow. It is basically totally restored as per original, was a 5litre (307) auto with banjo, 5" rims etc. I am in the process of removing the front crossmember, engine, box and diff. And fitting a Rodtech fabricated front crossmember with front mounted Ford Territory power steering rack and Astra electric pump, BA Falcon rotors and calipers plus a 9" rear axle with 3.25 Eaton trutrac and stock HK rear brakes but with HQ drums. Engine is a 385ci SBC with alloy heads as described and TH350 (don't want to touch the tunnel as this is the oldest known surviving V8 HK GTS). Wheels are 15" Pontiac RallyeII fronts 15x6, rears 15x7 but painted in HK GTS wheel trim colours, will be running 205/65/15 and 215/65/15 redband radials. Once all the mechanicals are finished just have to fit the Vintage Air setup and put all the interior in which is dead stock apart from a pair of V2 C8 seats I pulled from a low kM wreck near 10 years ago (standard HK non-reclining buckets are about as comfortable as a park bench). Then off to the Engineers for brake tests and certification.

Seems weird you can't post pics, and on that topic does this forum not resize stuff automatically? I note that my images above are cropped, if I have to manually resize each pic (that are externally hosted) doubt I will bother