G'day all. The new truck finally arrives on Friday after many delays (original delivery date was early September). 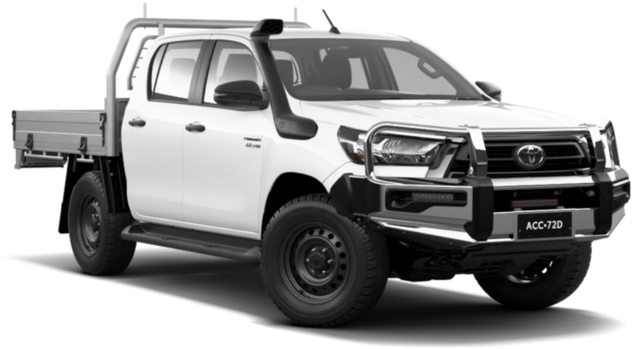 I'll be putting my aluminium canopy from my current 2010 Hiluxonto it, but I'm completely rebuilding the interior. I'll be building the new canopy fit out with aluminium Qubelok from Capral. It's going to be pretty complex. Hopefully it works out well. I'm going this way mainly for weight reduction. We've got a new Dometic CFF70DZ to go in there on a Dunn & Watson fridge slide. It replaces the two old Waeco CF50s. I'm going all in on Renogy electronics including:

Jobs for further down the track:

Picked up the new truck on Friday. Pretty excited. No build pics to show yet but I thought I might put up a couple of pics of the alloy winch bar. The Toyota guys tell me it's a completely new model. 5kg lighter than the steel bar but (allegedly) as strong. Looks good, I reckon.

And the factory compact LED light bar. I'm not sure it was great value at ~$700 ex GST. But Toyota wouldn't fit spot lights as they say they can screw with the camera system behind the Toyota emblem. I'm yet to give it a decent test.

First cab off the rank is installing the Redarc SBI12 battery isolator. I have no intention of putting an auxiliary battery under the bonnet of this vehicle. There will be 2x 100ah lithium batteries in the canopy to power everything under sun. The only reason I might end up with an aux lead battery under the bonnet is if I find myself doing lots of winching. This is only going to be a touring vehicle. The winch is only a last resort if we get really stuck somewhere with the caravan attached. So I'm planning on using it rarely.

So having said all that, not aux battery tray means there's nowhere obvious to mount the isolator. These two wheel arch holes line up. One is threaded and I used a bolt in the other. Rubber underneath to stop the paint wearing. I had a heap of welding cable from an old welder lying around, so using that where I can to avoid voltage drop.

The isolator is being used in the tow bar power supply. The Jayco caravan we're getting has one of those fridges that doesn't run off the caravans battery system. It's 240v or gas or 12v only when the car is attached. It's not an Anderson plug, it's incorporated into the 12pin trailer plug. I'm not the biggest fan of that setup, but we'll see how it goes.

Got the canopy mounted before xmas.

I've got most of the wiring done, lithiums, charger etc installed. I've done the floor of the canopy fitout. Just need to add some shelving for kitchenette etc.

Sorry about the messy shed.

I've ordered my suspension kit. After lots of too-ing an fro-ing I've decided to go with Bilstein shocks all round, King springs on the front and 500kg EFS springs on the back. It's a 45mm lift kit. I've ordered it through my local Fulcrum shop and they'll do the install for me. I've installed suspension before but I'm not up for the time commitment this time around.
Current: 2021 SR Dual Cab Chassis 4x4 2.8TD Manual
Retired: 2010 SR Dual Cab Chassis 4x4 3.0TD Manual
My current (2021 model) build thread
My previous (2010 model) build thread